A Termidor Treatment Controls the “ENTIRE” Colony in 3 Months or Less, thanks to the “Transfer Effect™…No Excuses!

Where you live, termites are a fact of life. Now 100% control of termites is a fact of life, too. Introducing Termidor, America’s first and only 100% termite control solution

Watch the Termidor video, “The Solution to Termites”

Termidor is a new type of termite treatment that for over 8 years has faced the stiffest test that both US and foreign researchers could throw at it. Without exception, Termidor passed with flying colors. In fact, no other termiticide in history has consistently returned 100% effective results whenever and wherever it was used. For you, 100% effective means that you can now choose a termiticide that not only eliminates termites from your home or business for at least the next 5 years. A Termidor treatment also gives you 100% peace of mind.

One of the most tested termite solution in history

Before Termidor was made available to American homeowners through Termidor-certified professional pest management firms, it was subject to some of the toughest tests in history. For almost 8 years, grueling USDA-Forest Service ground board and concrete slab trials in Florida, Arizona, Mississippi and South Carolina tested Termidor every which way. At every single application rate and at every last location, Termidor proved 100% effective. No exceptions. No excuses. Equally stringent Japanese research 8 year tests involved the formidable Formosan termite. Didn’t make any difference. Termidor again proved 100% effective. There were no exceptions, and among the termites, no survivors.Ok, but how about real trials in real homes? Since 1997, more than 100 single family dwellings and apartments from New York and Texas to Florida and Hawaii were treated with Termidor.These homes varied widely in size, structure, climatic zone and soil type. The results? You guessed it. 100% control of termites was verified in every case. All within 3 months of application. Finally, over the past 8 years more than 23,000 homes in France have been treated with Termidor. During this period there has been not a single failure or callback. Not one. Period. What does all this data prove? Only that if you choose to have your home treated with Termidor, you’re 100% likely to be 100% pleased with the results. No exceptions.

Many termiticides are repellents. This means that they keep termites away from a treated area, rather than killing them. But if there’s a gap in the treatment — maybe someone digs up a flower bed and brreaks the line of defense — the repellent effect fails and the termites get through. It happens frequently, and your only recourse is to have your home re-treated. Termidor is non-repellent. Termites can’t smell it, see it, or feel it. Since they don’t know it’s there, they forage freely in a treated area. The “100% effective” results begin here.

First, and like other leading “liquid applications“, a Termidor treatment is lethal to termites, they ingest it (since they don’t know it’s there, they ingest it readily). Second, and unlike other termiticides, Termidor is lethal by contact. This means that termites don’t even have to ingest it to die from its effects.

Termites are social insects who live in large, underground colonies. They feed each other primarily by passing food from mouth to mouth. They also groom each other. They contact each other as they forage for food. And Termidor takes advantage of this social behavior. As well as eating Termidor, a termite will also unknowingly pick it up and carry it back to the colony on its body. Thus, every other termite it contacts, feeds or grooms will itself become a carrier, contacting and infecting others. But because the fipronil in Termidor is slow-acting and allows the termite to continue its normal routine, it remains active long enough to transfer the termiticide to a large number of other termites in the colony before dying itself. This combination of ingestion, contact, and “Transfer Effect™” (which is unique, and puts Termidor in a category by itself) routinely provides 100% termite control. No exceptions.

How the “Transfer Effect™” works

Once a termite has ingested or contacted Termidor treated material with its body, it becomes a “carrier.” Every other termite it contacts will be infected…which in turn infects every other termite it contacts. But Termidor works slowly, letting termites contact many others before dying themselves. And although the Termidor effect on individual termites is intentionally slow, the overall colony management is fast: significantly faster than bait systems.

Can be 2-6 times faster than a bait system

Termidor’s unique “Transfer Effect™” manages termite colonies a lot faster than bait systems. And remember: termite bait is not added to a monitoring station until termite activity is actually observed at that station (even when the baits active ingredient is added it’s often a slow-acting insect growth regulator). As well as taking time, this also leaves the possibility of termite damage to the structure being baited, even though no termite activity is seen at the outlying stations.

How long does Termidor last?

100% results after 8 straight years. And Counting.

With Termidor, termites are killed, dead. That’s why there are no excuses, just dramatic results! Government and other tests in the US and abroad have shown that in almost 8 years there has been no break or reduction in Termidor’s effectiveness. These continuously monitored tests have involved al kinds of soil, widely varying climatic conditions (from New York to Hawaii), and several different species of subterranean termites. Bottom line, this means that you can count on at least 5 year’s worth of 100% termite protection when you choose Termidor. And unlike a bait system, Termidor gives you 100% protection from Day 1. There’s no long waiting period where termites are hopefully attracted to the bait, and the building to be protected is left entirely defenseless.

Is it safe? Does it smell?

And other vital questions. Termidor is one of the most thoroughly reviewed termite control products in history. Termidor is registered with the Environmental Protection Agency and can only be applied by a pest control professional who has been trained in correct application methods. Termidor is incredibly effective even at low application rates. For an average home treatment, only about 8 ounces of the active ingredient (fipronil) is actually used. Termidor bonds to the soil in which it is applied, so homeowners need not worry about soil movement from leaching or rainfall.. In addition, Termidor’s active ingredient, fipronil, is used extensively on food crops around the world and as the leading product for flea and tick control on dogs and cats since 1995.

No. Termidor has virtually no odor (which means neither you nor your family will notice anything). Since it’s applied with water, there’s also no solvent smell.

What does all this mean?

Just that we have gone to great lengths to create a termite control product which is responsible, as well as 100% effective. Termidor is fully approved by the EPA, as well as by other government authorities around the world. It can only be applied by a specially trained Termidor certified professional.

These are only the highlights. There’s much more to the remarkable Termidor story than we can include here. If you’d like additional in-depth information about Termidor and why it’s the best solution for your home, download our comprehensive Termidor Homeowner Brochure or watch the Termidor Homeowner Video’s below. 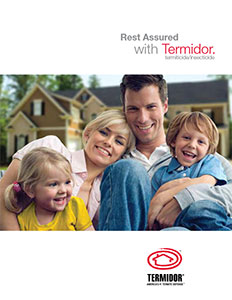 Does Termidor Sound Like the answer to your termite problem?